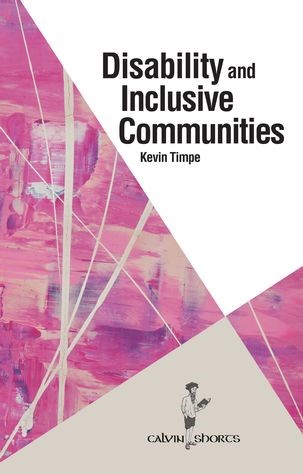 There are more than 2.5 million students with documented disabilities in higher education today, and InterVarsity’s 2030 Calling is to reach every student in every corner of every campus. InterVarsity groups that pursue policies and practices of inclusion discover the opportunity to learn from complex, complete human beings who experience life in different ways, and the Body of Christ is richer in its diversity. Kevin Timpe offers his suggestions here.

Q: Professor Timpe, how did you become an advocate for people with disabilities?

A: Our son was diagnosed with a number of disabilities when he was very young, and other diagnoses have been added over the past 11 years; so our family has been on a journey. A significant part of that journey has been the advocacy work that we’ve had to do—initially for our son, and then also for other families. We have an advocacy company, 22 Advocacy, which helps families with their children’s education and hosts public events. I’d love to do more and could easily spend 40 hours a week doing advocacy, but I also love my day job as a faculty member (that is, other than the grading).

Q: What motivated you to write the book, Disability and Inclusive Communities?

A: About five years ago I changed the direction of my scholarly work to focus on reading and writing about disability. Academics are doing some great work on disability from various disciplines—philosophy, disability studies, theology, etc. Yet the problem with much academic work is that it’s only read by other academics and often doesn’t have the wider impact it could have.

I started thinking about what I wanted people around us to know about disability, what I wish I’d known prior to our family’s own journey. Too often people don’t give much thought to disability until it impacts them, their family, or their close friends. And then it’s hard to know where to turn to get an overview of all the ways that disabilities affect our lives and communities. My motivation was to give people a brief book, like a primer, that is intentionally short but informative. I’m grateful that my college and colleagues support this work, even though it’s not the usual type of book that academics write.

The book is a labor of love to all the people we know—and their families—who live with disabilities. I want us to learn how to become communities that welcome and embrace, rather than make people with disabilities feel like they don’t belong, even unintentionally.

Q: What are some issues currently faced by those affected by disability on our college campuses?

A: All types of issues exist today. Many disabilities affect all parts of a person’s life. Too many college campuses are still not fully physically accessible, even though the Americans with Disabilities Act (ADA) was passed nearly 30 years ago. A student at my previous university couldn’t get to one of her classrooms because there wasn’t an elevator to the floor of the building where her class was scheduled.

Colleges are doing much better about mental health challenges that can be disabling, such as severe anxiety or depression. There is less stigma than there used to be, and many colleges and universities are more proactive about providing resources and accommodations. This is great, but we need to keep making progress in these areas.

I think intellectual disabilities are the trickiest for colleges because, by their very nature, colleges are academic. Colleges don’t often think about how they can provide educational opportunities beyond high school for students with intellectual disabilities. We as faculty are not very good at thinking about how the type of education we’re used to providing could be modified to allow others to continue learning.

There are a growing number of programs that are expanding to fill this need, such as the Ready for Life Academy at Calvin. ThinkCollege is a helpful resource that lets you see what kinds of programs there are and allows you to search by geography or particular program features. Q: In one of the chapters you write about the history of excluding those with disabilities. Why you think we should know about this?

It’s a depressing history for our country. We used concerns about disability to keep immigrants out of the country. There were laws in many cities, the “ugly laws,” that made it illegal for people with physical deformities to appear in public. In the 20th century, we forcibly sterilized over 80,000 people with disabilities. In fact, it was from American eugenics that the Third Reich developed a number of their policies.

We warehoused hundreds of thousands of disabled people in institutions rather than have them in our communities. These institutions were overcrowded with little stimulation or education. Sometimes there were as many as 70 “patients” per staff. And the rates of abuse in these facilities were really high. It wasn’t until the 1970s that students with disabilities were guaranteed a public education. Before the Americans with Disabilities Act (ADA) was passed, activists were protesting around the country—ultimately chaining themselves together in the Capitol building. It’s hard to improve our community practices without owning up to the history that led to our present situation.

Q: In the book you write, “The use of disability as a way of marginalizing or discriminating was also closely connected with various forms of sexism and racism in the U.S.” Explain more about this.

A: Yes, this is part of our problematic history. Disability was one of the justifications for chattel slavery in the U.S. during the 19th century. An example I mention in the book is Samuel Cartwright, a medical doctor and proponent of scientific racism. He argued that slaves had physical and mental defects that “make it impossible to survive without white supervision and care.” This kind of sentiment was wide-spread. And disability wasn’t just used to justify slavery.

And, even into the 1940s, it was claimed that Native Americans were particularly prone to disability, an excuse that was used to deny full rights to indigenous populations. We have a long pattern of using the label of ‘disability', even when it’s probably not accurate, as a way of suppressing members of marginalized groups from full participation and welcome in our country.

I’d like to say that this isn’t still the case, but I’m not sure we can. The discrimination has gotten subtler. But even today, the rates of disability diagnosis in children is higher among minority populations than among whites. And various terms related to disability are still regularly used as slurs, contributing to the stigma that is still attached to disability.

Q: The percentage of U.S. students with documented disabilities is 12% (2 million) for undergraduates, 8% of graduate students and 7% for doctoral students (National Center of Education Statistics). What can InterVarsity and other college ministries do to reach out, include and become co-laborers with these students, especially considering InterVarsity’s 2030 calling?

If InterVarsity wants to reach every corner of every campus and be on every campus that has a 1000+ student population by 2030, then being friends with students with disabilities is a great way to go about it.  They also need to be encouraged to apply for and be supported in leadership roles. After all, just because a person is disabled doesn’t mean that they can’t lead.

We need to change this by changing how we make people with disabilities feel in our Christian communities. One would hope that the Church would be a more welcoming place for individuals with disabilities than the community or culture at large. Unfortunately, that’s not my experience. Autistic adults, for example, often find religious congregations to be some of the most inhospitable and unwelcoming spaces. Adults with disabilities are significantly less likely to be involved in local churches than non-disabled adults.

Q: What can we do as a next step after reading what you shared?

A: The best thing we can all do is to have friends with disabilities. We have a lot to learn from them. But we have to value them not just for what they can teach us, but for who they are. We need to be invested in their lives and have them invest in ours. If your readers would like to do something concrete, go make a new friend.

Kevin Timpe, PhD, teaches in the philosophy department at Calvin College in Grand Rapids, MI. He and his wife, Allison, have three active children. Allison’s father also lives with them. Kevin’s academic interests include free will, virtue ethics, philosophy of religion, philosophy of disability, and metaphysics. He drinks espresso by the quart.