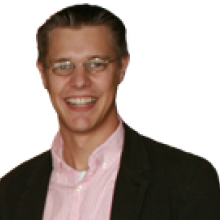 Brian is a graduate of North Dakota State University with a degree in computer science. While in college, he was involved with InterVarsity Christian Fellowship. Upon graduation, he spent a year interning with InterVarsity in Bemidji, MN where he met his wife, Sandi.  He worked two years as campus staff for the InterVarsity chapter at the University of Minnesota Duluth before getting married in 2005 and moving back to Bemidji to work once again with the InterVarsity chapter at Bemidji State. In 2008, Brian became the Area Director for Northern Minnesota where he recruits and empowers staff to work with the students on colleges and universities all over the area. Brian and Sandi have two children and are avid baseball fans. Brian also enjoys programming, photography, and running.

By Brian Asker
What's Your Village?

Do you ever look at the campus and think to yourself, what would it take for every student on campus to get a chance to meet Jesus?