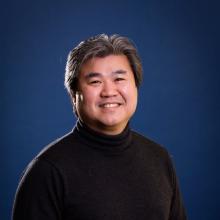 Henry has served with InterVarsity since 1991. He has an impressive record of planting new ministries, directing innovative conferences and coaching staff in establishing new ministries. Prior to his appointment as Director of Arts Ministry, he served within Collegiate Ministries in a variety of roles. Following his time as campus staff at Northwestern University, he continued to serve in the Great Lakes West Region as Regional Asian American and then Regional Multiethnic Director. He transferred to the Southern California Region, after marrying Una Lucey-Lee, and served as an Area Director in the Greater Los Angeles Division. When he returned to the Great Lakes West Region, he led the Regional Strategic Leadership Team.

By Henry Lucey-Lee
A Christian and an Artist

When I was in college studying art, I usually kept the “Christian side” of me separate from the “artistic side” of me whenver I stepped into my art building.